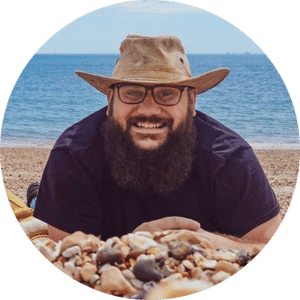 It’s my mission to offer the best range possible of super 8, 8mm and 16mm cine cameras at affordable prices, all personally inspected (and when needed, serviced and repaired) to ensure they’ll work for years and years! Filmmaking is my passion, I’ve been making films on all formats for over 20 years (I started young!) studying filmmaking in College before going on to film and direct adverts, music videos and several award-winning short films.

My love for Super 8 film started in 2014 when I discovered a series of how-to videos by YouTuber Ray Roberts about Super 8 filmmaking. I did a bit of research and ended up purchasing a Canon Auto Zoom 518 SV Super 8 Camera (which is a fantastic camera) and one reel of Kodak Ektachrome 100D Colour Reversal film. 2 ½ minutes of footage later and I was in love.

Since then, I’ve continued to play with Super 8 along with other analogue and digital formats.

Well, that came later… I’ve always loved a bargain, searching through charity shops and carboot sales looking for vintage lenses and cameras. One day whilst in Salisbury with my then girlfriend, I managed to pick up a mint Carl Zeiss 50mm Planar T 1.4 lens, still boxed for next to nothing. Only thing was, even though it was advertised as a Contax mount, it clearly wasn’t. Even after chatting to camera clubs, facebook forums and even contacting Zeiss, I still couldn’t work out what it was…so I improvised! I removed the mount, purchased a EF-NEX adaptor then designed and 3D printed a special washer to join the new mount and lens! Jobs a good’un!

So, why buy from CameraCrate.com?

So here’s the deal, I started CameraCrate because I’m a filmmaker who loves cameras, lenses and super 8. This is my love. Every item that comes through us is fully inspected, and unless specifically mentioned, serviced and repaired to ensure it’s in great condition. If it’s listed as fully working, then it will arrive ready to go, in good working order.

Having received over 1100 5-star reviews in the past year (against 1 negative), I’m confident that we’ll exceed your expectations. But if for any reason you’re unhappy with your order, we offer a no-quibble 30 days returns policy and a comprehensive 60 day warranty.

Not a problem – I love talking kit and answering questions. Contact us and I’ll get back to you promptly!